the attack of jack

for two weeks in July I had the joy of going home and meeting my nephew Jack for the first time.

its super weird seeing my brother transform from simply my brother to a husband to a father.

jon taught me to ride a bike. when i first got rid of my training wheels jon decked me in every article of sports gear he could find. i recall going into his closet and him pulling out a football chest protector, soccer shin guards, knee and elbow pads, and a helmet. he told me it was okay to fall because there was no way i could get hurt. he was right.

when i got older he taught me how to play basketball and hockey. he can be really annoying to play on the same team as because he yells at you and tells you where you need to be and how fast you need to be running. but its only because he believes your capable of performing better. in hockey I always would try to pass the puck off to a teammate who i knew had a better chance at scoring but jons voice would be booming in my ear with annoyance “just shoot it Kim!”.

he has introduced me to almost every band i love. jon likes to bob and bounce and sway and sing along to every lyric he knows when he is at a concert. at one show he pointed out a dude leaning up against a wall staring at the band on stage as they played. “thats the lead singer from glory nights” he said. but i was quite confuzzled how a member of one band could seem so unengaged with another bands performance. when i mentioned his somberesqueness to jon he promptly corrected me and said “not everyone enjoys music the same way Kim”. such a simple statement, but that nugget has stuck with me through years of staffing DTS’s. just because a student isn’t clapping or singing or what i consider is “engaging” with Jesus during times of worship doesn’t mean they aren’t.

since we have grown up and gone our own God ordained ways I have seen a lot of beauty in this world. but watching my brother become a father, seeing him come home from work and hold his son and smother him with kisses for the first time holds its weight against the rice terraces in the Philippines and the mountains of Tibet.

with every change in life, with every shift large or small another piece of us is revealed. with Jack’s introduction to our family I get to see sides of my mother, father, brothers and sister in law that I have never seen before. (i mean, who knew my mother was such a knitting guru?) I am excited to see more of our selves show up as each one of us learns to love this little man more and more. 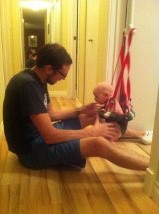