“Circuit rider” is a popular term referring to clergy in the earliest years of the United States who were assigned to travel around specific geographic territories to minister to settlers and organize congregations.
Because of the distance between churches, these preachers would ride on horseback. They were popularly called circuit riders or saddlebag preachers.
They traveled with few possessions, carrying only what could fit in their saddlebags. They traveled through wilderness and villages, they preached every day at any place available (peoples’ cabins, courthouses, fields, meeting houses, later even basements and street corners). Unlike clergy in urban areas, Methodist circuit riders were always on the move. Many circuits were so large that it would take 5 to 6 weeks to cover them. The ministerial activity of the circuit riders boosted Methodism into the largest Protestant denomination at the time.In 1784, there were 14,986 members and 83 traveling preachers. By 1839, the denomination had grown to 749,216 members served by 3,557 traveling preachers and 5,856 local preachers.

Thank you Wikipedia, for saving me time on typing.

“Circuit Riders” was also a five week school I just attended at the Ywam campus in Kona, on the Big Island of Hawaii.

The name for the school, although inspired by the circuit riders of old, was primarily given through many visions and words of the Lord to the leadership team in Kona this past year. God said to run a school that would train and equip our generation to bring the simple gospel to the nations, much like the Methodist preachers did in America 2000 years ago. To call a new breed of wild eyed evangelists, who were willing to go to the hardest and darkest to share the good news of Christ. A Gideon sized army (there were 300 staff and students in the school) who would fight for their King.

The lost need salvation and the saved need reviving.

Over the past five weeks we had an assortment of speakers teach us.
Bryan Brent began with freedom- breaking free from passivity, fear, shame, death, anger, rejection and much much more. Repent, rebuke, replace, receive. It began with freedom so that we could share the freedom we personally have experienced with others. It is hard to lead where you have not gone. Passivity was a huge stronghold we took down individually and corporately- it is very hard to reach out to the lost if you don’t even care for the lost. Or if we can’t even get off the couch.

It continued on with Ray Hughes taking us through the history of revival in America and Europe, and encouraging us to be the nameless and faceless history makers for our generation.

Ywam founders Loren and Darlene Cunningham reminded us of the importance of listening to the voice of God and then obeying. And as we live out what He calls us to we must remain servant hearted and Christ focused.

Next, Jackie Pullenger came and brought the fear of the Lord in calling us into deeper levels of commitment to God. She encouraged us to lay down our rights, plans, and entitlement in order to take the Great Commission to the nations.

Meanwhile, Andy Bird would sneak his amazing tidbits in inbetween speakers. First lets fall in love, then we’ll change the world: the second command (love thy neighbour) must be birthed out of the first (love thy Lord). Also, charisma and character must go hand in hand. If we want to see revival in our lives and in those around us, our passion must be marked with integrity in the small things first. Clean your room before you ask God for a nation.
It ended with Lou Engle, founder of The Call, commissioning us out as an answer to his prayers for a generation of revivalists to sweep across America. A prayer He and his wife Therez have been praying for us for the past twenty years. 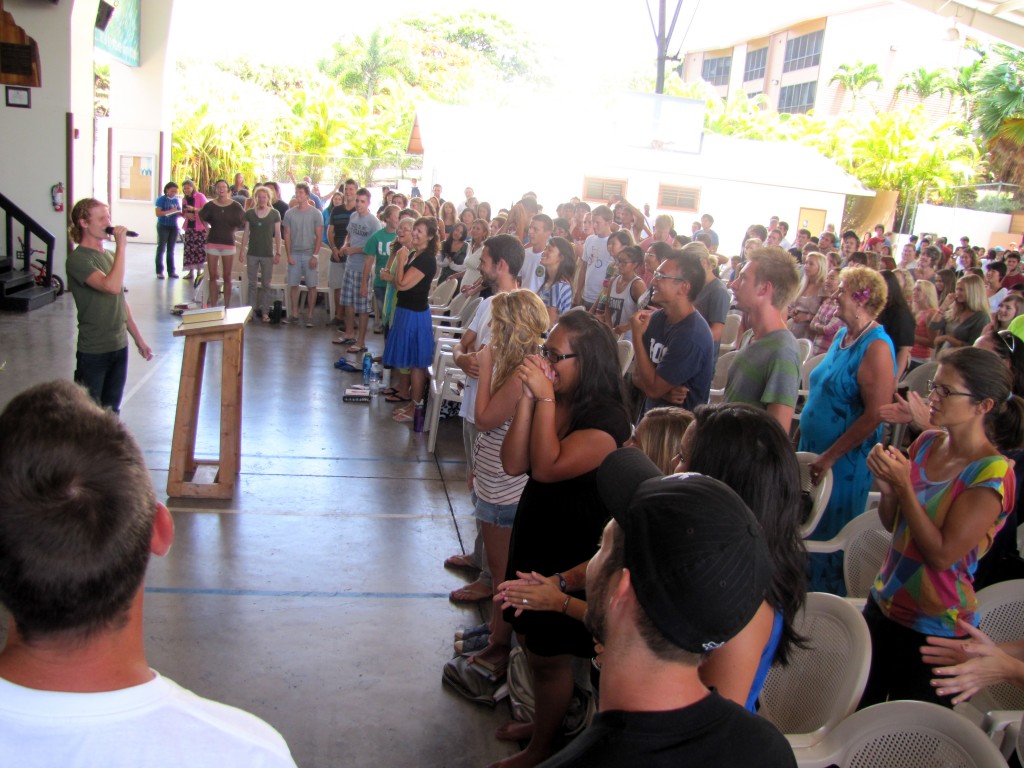 The worship times were often lead by Laura Hackett, who came for a week from the International House of Prayer in Kansas City, but then felt God calling her to stay the whole school and go on outreach also. She taught some basic components of worship for a few days, which i was eager to soak in. After those few classes I was itching to get back to Kauai just to dust off my guitar  and worship before the Lord.

Outreach consisted of door to door evangelism. We would literally knock on a door, introduce ourselves then ask if they needed help around their yard or prayer for anything. Over the five weeks, the last number i heard was of 80 salvations! Praise the Lord!

There were numerous teams that got sent out this past weekend to the mainland- Orange County, Washington DC and Alaska. Please keep these teams in your prayers. They will be ripping up Huntington beach praying for healings and salvations, holding tent meetings (think: Jesus movement circa 1970) and praying in front of the White House.

I won’t be there for any of these crazy moves of God on the mainland, but I have also never been so excited to be back on Kauai.
This Island was designed by God to be a resting place, to be a place where creation tells of its Maker’s majesty.  He never intended for the spirit of death, or the abuse of drugs and alcohol to infest this place. In the same way, there were no mosquitoes, centipedes, or other vermin when the Polynesians settled here hundreds of years ago. Unfortunately darkness has been welcomed in (yes i consider mosquitos ungodly haha) but we come in the opposite Spirit and proclaim the LIGHT of Christ over these islands. Hawaii will be restored to its original design. How wonderful to be a part of that restoration process.

Its crazy to think that God has been writing my story since before the creation of the earth.
How beautiful it is to be a part of the song creation sings in celebration and praise of their maker.
How wonderful to be so intimately known, and so sacraficially loved by someone altogether higher, altogether seperate, altogether mighty and altogether perfect.

How great it is to run this race with Jesus and for Jesus and through Jesus.

To Him be all the GLORY!